The Cyprus Sea Post Office was created as part of an effort to improve the communications with the Island, and what started as an experiment served Cyprus well from 1908 to 1932.

Cyprus, as an island, had always depended on the sea for trade and on foreign ships for its enablement.  But it is perhaps not so surprising that there was a contract to carry the Cyprus mails, given the changing occupation of Cyprus by different nations through the centuries.

In 1880 the Cyprus Post Office was no longer under the control of the Imperial Postmaster in London.  Inland roads were improved and a postal network was gradually spread across the Island, and external communications began to improve.

Before the British occupied the Island, the British Government had a contract with Bell’s Asia Minor Steamship Co. for the carriage of mail between Britain and the Levant, which itinerary included Cyprus.  This expired in December 1884.  Foreign mail to and from the Island was then carried by Austrian Lloyd steamers which ran a fortnightly service.

In April 1893 Ernest Hore became the Island Postmaster and agreed a new contract with Bell’s Asia Minor Steamship Co..  Bell’s, and at times the Austrian Lloyd Line, provided sea mail facilities until November 1905 when Mr Hore recommended the establishment of a Cyprus SPO.

The Limassol Steamship Co. was formed in 1905 and acquired three vessels, SS Lefkosia, SS Salamis and SS Kypros.  A regular passenger and cargo service between Cyprus and Egypt was established, which was so successful that in October 1906 the Limassol Steamship Co. was awarded the mail service contract between Cyprus and Egypt for the next three years.

The legal basis of the Cyprus Sea Post Office was thus established.  In return for a subsidy of £4,750 per annum the company would:

“convey all mail between Alexandria and Port Said in Egypt and Famagusta, Larnaca, Limassol and Paphos in Cyprus at a speed on not less than 10 knots”.  Further, “the Company shall, if and when required by the island Postmaster, provide free of cost and to his satisfaction on every vessel employed on the service, a place suitable for the sortation of mail upon the voyage between Egypt and Cyprus or between the several ports of call in Cyprus, and every officer of the Post Office employed on such service shall be provided with first class passenger accommodation free of charge (excluding food)”.

The travelling Sea Post Offices (SPO) were therefore small sorting offices in which mail for the District Towns in Cyprus was sorted.  When the ship docked, separate bags were then sent to their destinations by road.  Mail sorted on board was date stamped with a special stamp, of which four types were in use during the life of the SPO.

At this time an increasing amount of mail was being sent to Nicosia which then became the General Post Office, and post offices such as that at Larnaca became District Offices.

The first type of SPO date stamp (Castle Type 50) is a double circle 28 mm in diameter.  This date stamp was used on the SS Lefkosia and SS Salamis of the Limassol Steamship Co. and later on the SS Kosseir of the Khedivial Mail Steamship Co. 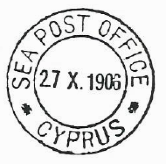 In 1912, the Limassol Steamship Co. was replaced by the Khedivial Mail Steamship and Graving Dock Company with which the Government of Cyprus entered into a contract for seven years for the carriage of mail by sea to and from Cyprus.  The Island Postmaster wrote in his Annual Report:

“The steamer employed generally on this service has greater speed and carrying capacity and better accommodation for passengers, and the cabins allotted for the use of the Sea Post Office are more commodious and accessible, than those of the Limassol Steamship Co. under the previous contract.  The subsidy has been increased from £4,750 to £5,000 for an 11 knots service, to be increased to a 12 knots service after four years.”

The winter timetable, 15 October to 14 June, shows that the mail steamer departed from Alexandria on Tuesday at 2 pm, and from Port Said on Wednesday at 11 am, arriving at Famagusta within 23 hours of its departure from Port Said.  The ship then proceeded to Larnaca on Friday, and departed at 2 pm on the same day for Limassol.  From Limassol it departed at midnight on Friday and called at Paphos on Saturday once a fortnight, leaving at midday for Port Said and arriving at 7 am on Sunday.  The steamer then sailed to Alexandria, arriving at daylight on Monday.  A slightly different timetable applied during the summer.

A further mail contract in 1926 required the use of two ships, which meant that a second date stamp was required.  This was a single 25 mm diameter circle (Castle Type 51) used from June 1926 to June 1931.  Castle also records a variant of this date stamp (Type 51A).

By 1927 the Cyprus Sea Post Office service had operated successfully for some twenty years.  The Cyprus Government, in an attempt to economise, considered termination of the SPO.  The Island Postmaster opposed termination of the service, although he conceded that for the two days in port at Alexandria the postal staff carried out very little duty.  The Government was not convinced by the Postmaster and the service stopped on 7 April 1927 following the arrival of the SS Bilbeis at Larnaca.

Termination of the Cyprus Sea Post Office service attracted strong protests and there were negative repercussions on the efficiency of the Island’s postal services.

The SPO was restored on the Khedivial Mail Line steamers in February 1928.  The service operated using the two existing mail steamers, the SS Bilbeis and SS Belkas, with new timetables.  The 1928 weekly itinerary served:

In June 1929 a fourth date stamp (Castle Type 52) was introduced and remained in use until the termination of the SPO service in 1932.

Correspondence and stamps of Cyprus can be found with steamship name cachets.  The Khedivial Mail Line cachet was a double circle name stamp with the name of the steamer in the centre.

The company’s cachets on covers posted at the SPO on board for the two ships are straight two-line markings: S.S. BILBEIS/ CYPRUS-EGYPT and S.S. BELKAS/ CYPRUS-EGYPT.

The Cyprus Sea Post Office was abandoned in December 1932, as one of the austerity measures taken by the Cyprus Government in response to the economic depression affecting the world in the early 1930s.