Exmouth Stamp Club – a Member of the Wessex Philatelic Federation

The New Year has started rather auspiciously with us all entering into a new period of lockdown.  But we can be positive now that vaccines are available to help alleviate the dire consequences of the virus, enabling us at the Club to look forward to a time when we can start meeting again.

As soon as restrictions allow, the Committee will organise a programme for the remainder of the year.  Meanwhile restrictions prevent travel for non-essential purposes, so we have temporarily suspended circulation of new stamp boxes – if members happen to have a box at the moment, they should only pass it on when it is safe for them to do so.

2021 marks 82 years from the foundation of the EXMOUTH STAMP CLUB (ESC), which we are marking with a newly designed logo for use by members.  The logo was designed for us by Alex Jackson Creative, and endorses our connection with the maritime frontage of our native town and its significant clock tower.  As you will see from the logo, the sun always shines in Exmouth!

We welcome new members to the club, regardless of the size or significance of their collection and whatever branch of philately they choose to explore.  Our experienced members will help them to develop both ideas and knowledge to develop their album contents and boxes of spares, and the less experienced members will afford them a very warm welcome, when Branch meetings re-commence as soon as Government rulings allow us to gather again.  During the last quarter we welcomed with great pleasure two new members to ESC – may you find membership a beneficial and interesting experience.

The Club’s website exmouthstampclub.org holds essential information and items of interest to amuse and educate, and our regular auctions and boxes of approval books with stamps for sale are on a well-organized circuit to which members can subscribe free of charge as part of their annual membership fee.

This quarterly Newsletter is sent to all members by e-mail or by post.  In it we aim to update members of Club activities and to include articles of general interest.  Items of a philatelic nature that you find interesting can be included in future Newsletters – if you find it interesting, somebody else in the Club probably will as well!  Please post or email any contributions to the Secretary.

The innovations of the logo and Newsletter mark a long history of collecting which we very much hope will continue into the next century or beyond, with your help, encouragement and support.  Your ideas for encouraging members and improving the Club are welcomed by the Committee.

This extract from “Old and New Rochdale and its People” (by William Robertson, 1881) shows what in 1840 the public were expecting from the introduction of the penny post.

“The building …. used as a post office was in the charge of Jane Lee [post mistress from 1818 to 1840].  In the window there was a small door, used for the purpose of making enquiries about letters, and where stamps were sold.  The business was not of great extent, and the remuneration was proportionately poor, which caused Jane to be irritable.

If a person enquired about the arrival of an expected letter the answer was given in an ill-natured, snappish tone; purchasers were no better treated, and no favourites were shown.  Her son was not more courteous than the mother, and this little doorway was approached with trepidation.

A working man one day was noticed to post a letter, and then he coolly put his hands in his pockets and stood on the parapet for about five minutes.  He then approached the door and knocked.  It was opened, and Jane, in her usual cross voice, demanded what he wanted.  Giving his name, he enquired “Is there a letter for me?”, to which Jane abruptly replied “No” and hurriedly shut the door.  The visitor replaced his hands in his pockets and patiently waited another five minutes, and again rapped at the window.

Jane, seeing the same countenance, and receiving the same enquiry, became exasperated, and sharply reminded him that she had answered the enquiry only five minutes before.  Then he explained that only ten minutes before he had posted a letter to Liverpool, and he was now awaiting a reply.  Jane enlightened the darkness of his understanding in caustic language, and from that time he became aware that post letters were not carried at lightning speed but by the slow process of coach and horses.”

Further reports in the Rochdale Observer suggest that by 1859 the method by which letters were transmitted was still not understood by some Rochdalians. 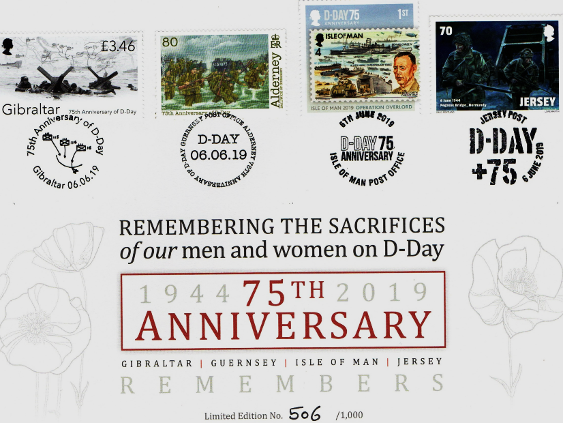 This 75th anniversary cover involved several sets of stamps from four offshore or overseas territories.  This cover is very scarce cover – in fact, for every 68,158 penny blacks issued from the 1840s only one of these covers was issued!

In total 1,000 covers were produced which were subdivided between Guernsey, Jersey, Isle of Man and Gibraltar making the cover a very scarce item for the issuing philatelic bureaus with only 250 each.  Numbering 001 – 1,000, the illustrated cover was the sixth to be sold from the Isle of Man Stamps & Coins Bureau, having been purchased on first day of notification of sale.

Although an expensive cover it is maybe questionable whether or not it offers value for money, for the commemoration presentation is poor with the exception of Gibraltar to which one of our members can relate to the dreadful scenes on Omaha Beach.

Although Alderney is part of the Bailiwick of Guernsey, the stamp commemorating such an important moment in history should perhaps have been released under the Bailiwick of Guernsey.  Jersey never issued a 75th commemorative and had to use a 70th anniversary stamp of Pegasus Bridge while the Isle of Man reproduced stamps from the 50th anniversary.

Pegasus Bridge illustrates the first company battle of Normandy (on a smaller scale than the Ludendorff Railroad Bridge at Remagen and the Arnhem Bridge now named ‘The John Frost Bridge’) and ranks among the most famous of Western Europe campaigns of World War II.

The Bénouville (Pegasus) Bridge over the Caen Canal and Ranville (Horsa) Bridge over the Orne River are situated approximately 10 km inland, were critical points on the Eastern Flank of Overlord.  We have all driven along Bridge Road on the A379, but did you realise the significance in what this stretch of road played in helping in the success of this operation back in 1944.  It was here the topographical people of World War II found a place where river and canal ran closely together and crossed by the same road was similar to the bridges at Bénouville and Ranville.

Early May 1944 the bridges on Bridge Road were attacked with live ammunition from friendly forces bearing the Pegasus insignia of the 6th Airborne Division.  Grenades caused the biggest problem as they were also used for illegal fishing providing supper for the glider borne troops.  It was here that D Company of the 2nd Airborne Battalion, Oxfordshire and Buckinghamshire Light Infantry, in six Horsa gliders would land to within 47 yards of their objectives at 00:16 6th June 1944 and take the bridges in ten minutes.  However, one of the Horsa gliders, landed at the wrong bridge on the River Dives some 7 miles away.  The £2 miniature sheet commemorates the link up with the beach landing force of Lord Lovat’s Commandos.

The four stamps from Gibraltar tell a story of the early morning of 6 June 1944.  With the five beaches, the stamps centre on Omaha where the US received very heavy casualties, this contrasts with Utah where casualties were extremely light.

At Braunton Burrows, North Devon you can relate to the £2.86 stamp illustration as you stand looking out through the bow of the concrete landing craft where 10,000 GIs trained for operation Overlord.  The £3.46 stamp tells its own story of the horrors of Omaha and the map overlay illustrates the initial landings of the largest amphibious landings in history.

If you enjoy collecting “unusual” stamps, then this ‘extra long’ $2 stamp featuring a panoramic view of the Singapore Skyline might well be on your list of “must haves”.  It certainly is long at 163.2 mm in length.

Issued on 14 October 2020 by Singapore Post Limited, this is the longest single stamp in Singapore’s history.  It is one of a two stamp set featuring the skylines of Singapore’s business district and one of it’s most mature residential estates.

The $2 stamp features a panorama of Singapore’s renowned skyline of the Marina Bay Central Business District.  Colourful by day and glittering with lights by night, the Marina Bay is an often photographed and iconic vista of the island state.  Encompassing the skyscrapers of the Business District and the heritage buildings of the Civic District, as well as the award-winning gardens and leisure attractions that line the Singapore River, the scene also shows Singapore’s high-rise homes and the shipping in the strait in the background.

The $1.40 stamp features one of Singapore’s longest public housing apartment building, Block 34 in Whampoa West.  Built in 1971, the building is famous for its 320 metre long corridor, featuring 46 apartments on each floor.  The ubiquitous apartments built by the Housing and Development Board (HDB) are what most Singaporeans make home and are locally referred to as ‘HDB flats’.  The HDB apartment blocks and their designs track Singapore’s progress through the years, symbolising Singapore’s advancement from third world to the first.

It was announced on 1 May 1953 that a special stamp issue would be produced to commemorate the forthcoming self-government of the country.  Three denominations were printed of 15 milliemes, 3 and 5 piastres, printed by the typographic process on multiple ‘S.G.’ watermarked chalk-surfaced paper, with 13 perforation by the De La Rue & Company.

It was not possible to say exactly when the stamps would be issued, as it would depend on when the new constitution came into effect.  Stamps were prepared with the 1953 date but owing to not knowing the exact date for issue, the design was also used again with the year changed to 1954.

The expected issue dates were either December 1951 or January 1954.  Eventually the date was announced as 9th January 1954.  It appears in error that 5000 sets of the 1953 sets had been issued to London dealers.  Sales were stopped but many had already been sold.  The stamps were deemed postally invalid – bit of a mess-up for the Sudan Agents in London!

Austria’s postal service has united two aspects of the coronavirus pandemic in a stamp printed on 3-ply toilet paper that people can also, at a push, use for social distancing.  The €2.75 (£2.50) ‘corona stamp’ comes in sheets 10 cm wide, or a tenth of the 1 metre distance that the (Austrian) government advises members of the public to keep apart from each other.

According to Österreichische Post, if you put 10 stamp sheets end to end, you get a metre’s distance in total – or the length of a baby elephant.  The famous baby animal is also printed on the stamp.  The corona stamp was sold at twice its face value, with the mark-up going to charity.

Österreichische Post has poked fun at current events before.  In January it issued a Brexit stamp with the previously planned date of Britain’s departure from the European Union, 29 March 2019, crossed out and the new date of 31 January 2020 underneath – an apparent wink at the drawn out negotiations.

The club newsletter for December 2021 is now available, please click the link to see it.

Exmouthstampclub.org is a participant in the Amazon Services LLC Associates Program, an affiliate advertising program designed to provide a means for sites to earn advertising fees by advertising and linking to Amazon.co.uk.